You are here: home london heritage 3 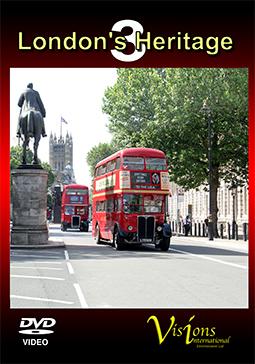 London’s  Heritage 3 is almost the 2014 Heritage Year Book, featuring an incredible  thirty-one different bus types. Notable events include the RT75 celebration, the Year of The Bus cavalcade through the capital’s streets, and heritage buses back in service during the spring's Underground  strikes.

RT75 - We travel to  Ash Grove garage on board RT1700 to record the mass gathering of RT  variants. Extra footage shows many of them working part of route 22 to commemorate the first journey of RT1 in 1939.

West Ham -  Behind-the-scenes footage of the morning run-out of the Routemasters for  Heritage route 15.

RM Interlude - RCL2239  on a wedding special in Visions' home village of Boreham in Essex.

Rally Round-up -  Another stunning selection of bus types at the 2014 events -  Watford, Detling, Sevenoaks, Harlow, Slough and Stevenage - each illustrated with a variety of locations

Strike 2 - We head  back to central London to record the heritage buses pressed into action during  the second tube strike in April 2014. RMs, RTs, a Metrobus, a Titan and a Fleetline appear on a selection of routes.