You are here: home london’s heritage 4 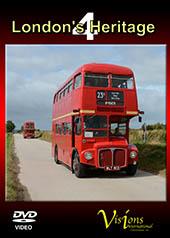 LONDON’S HERITAGE 4 picks up where Volume 3 left off at the end of 2014 and showcases another prime selection of hand-picked events worked by London’s ‘old masters’.

The full running order:
RTs on Route 11 – The TfL-inspired running day to round off the Year of the Bus and bring the RT75 celebrations to a close.
Romford Running Day – The Essex version of the route 11 event held twelve months later, when many local routes enjoyed a whole day of free heritage service.
Goodbye Hemel Hempstead – The special running day to mark the closure of the very last London-Country style bus station.
RMs on Route 2 – Another celebration, this time the 50th anniversary of RM1’s entry into service in 1956, commemorated with a road run from Golders Green to Crystal Palace . . . accompanied by many others.
Oxted Running Day – The second was even better than the first (in our humble opinion) and our cameras were positioned at all the busy locations, from Old Oxted to The Crown at Westerham. Imberbus – The annual opening of restricted roads on Salisbury Plain, allowing a plethora of RM types to run to the abandoned village of Imber. Windy and wet, but great fun.
Epping-Ongar Railway – The regular bus service operated alongside the railway running days, and a special event bringing even more nostalgia to the area.
Miscellany – The final segment is a collection of video from far and wide featuring, amongst others, the Duxford runway, Upminster, Canvey Island and Bromley Garage Open Day.

The ‘must have’ heritage programme of 2015 and 2016.
Features: Motion-menus, chapter points and our ‘commentary off’ option.
Written & Narrated by David Maxey