You are here: home london’s heritage 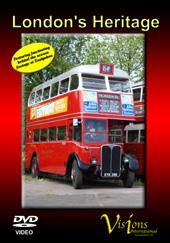 London’s Heritage features more than 115 working buses of eighteen different types once common on the streets of the capital. As well as in-depth sections on the most numerous survivors - RM, RML & RT - there's also a behind-the-scenes look at Ensignbus’s garage in Essex where many gems can be found in the workshops and the restoration shed. The RT-worked regular service alongside of the Epping & Ongar Railway also earns its own section.

As well as the central area Routemasters, the RMC & RCL sub-classes feature in the general double-decker section alongside RLHs, Daimler Fleetlines and the LT Museum's K-Type. Single-deckers divide into two groups - the especially numerous preserved RFs . . . and everything else, including the Leyland Tiger, the Merlin, the Guy Special and even the Leyland National.

Filmed at many diverse locations, including Brooklands, Duxford, Epping Forest, Maidstone, North Weald, Slough, Walthamstow, Weybridge, Windsor and Wisley, this nostalgic, non-stop footage truly has something for everyone.