You are here: home routemaster 60 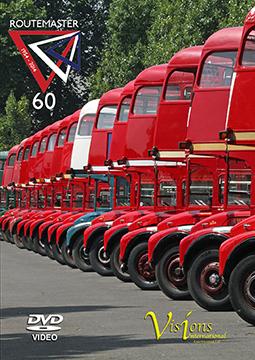 Over the weekend  of 12th & 13th July 2014, an astonishing 136 Routemasters descended  on Finsbury Park in north London to celebrate the 60th Anniversary of this timeless icon. In the programme  you will see 90 of these vehicles on the move, but the static display is covered fully too, with a couple of runs along the length of the line-up  on both Saturday and Sunday. We also show the Saturday morning  arrivals from numerous locations inside and outside the park. There are views of buses arriving at the display area and being carefully positioned.

A fantastic sequence featuring two silver Routemasters running around the park was captured from our camera car.RMs, RCL, RMC and  RML were specially filmed 'on the road' while working the Manor House to  Seven Sisters circular X60 service. Sunday ends with  a mass departure as vehicles of all types, and in various colours, head home. For a different perspective, there's even  a few shots taken from the top of the ferris wheel!

Routemasters 1-3  and 5-9 all make an appearance,as do buses from Germany and Sweden,  converted RMs and vehicles returning to London for the first time in years. If you were at  the event, this is the perfect souvenir of an unforgettable weekend. If you weren’t, you really need to see what you missed!